The first preliminary meeting was organized by Prof. Yves Moens during the 7th World Congress of Veterinary Anesthesia in Berne, Switzerland on September 20th to 23rd, 2001. A group of enthusiasts from all over Europe decided it was time to start a society that should become the European platform for everybody involved in the development of veterinary emergency and critical care (VECC) in Europe.

The Society was formally registered in the Netherlands on March 27, 2002 by the founding fathers, Prof. Dr Yves Moens and Dr Joris Robben. The society had its founding meeting in April of the same year during a pre-congress day of the “Voorjaarsdagen” (Spring Days) Congress in Amsterdam, the Netherlands. The first Executive Committee consisted of Dr Derek Hughes (President), Dr Nuno Paixao (Honorary Secretary) and Dr Fabio Viganó (Honorary Treasurer/Membership Secretary).

One of the achievements of the Society has been the organisation of its yearly Congress.
The Society has pushed VECC forward in Europe in other ways too. It developed and executed a questionnaire to obtain a sound picture of the status of VECC in Europe. Its officers and members have been active in promoting EVECCS and its cause throughout Europe.

In 2006 the growth of the Society was also noticed by Dr Gary Stamp and other members of our sister organisation in the United States of America, the Veterinary Emergency and Critical Care Society (VECCS). The support of VECCSand the close relationship that has developed since then between the two societies has been of tremendous importance for the development of EVECCS and its Congress. EVECCS joined VECCS in supporting the Journal of Veterinary Emergency and Critical Care in 2007 by making it its official journal. EVECCS and VECCS even offer a combined membership, so members can enjoy all the benefits of both organisations and the Journal just for one very attractive fee. 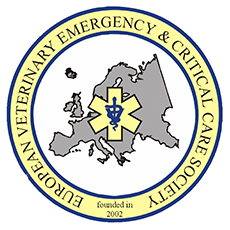 The round EVECCS logo has a yellow rim with blue margins which depicts the name of the Society and the year it was founded. The centre contains a contour of Europe indicating the geographic location of EVECCS. The blue-rimmed, yellow six-point star with the Rod of Asclepius in the centre is derived from the Star of Life. In the international community, the originally blue-colored Star of Life designates emergency care units and personnel. A similar orange star is used for search and rescue personnel.

The Rod of Asclepius is a common symbol for western medicine. It features on the flag of the World Health Organization as well as the logos of many hospitals and medical services. The symbol combines the image of a snake which sheds its skin and is reborn as it were, with the staff of the god of medicine, Asclepius. To indicate the veterinary background of the Society, a V is added on top of the Rod of Asclepius.

To unify and co-ordinate the VECC community in Europe